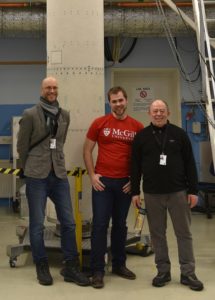 Member scientists of The Combustion Institute at McGill University, Canada conducted a particulate combustion experiment (PERWAVES) aboard a European Space Agency sounding rocket that launched from northern Sweden on Friday, 7 April 2017. The unmanned MAXUS-9 rocket carried the research experiment 700 kilometers straight up – twice the height of the International Space Station – in a successful effort to further scientists’ understanding of how metal powders, like iron, can be used as a zero carbon emissions energy carrier.

Professors and students in the mechanical engineering department at McGill have been exploring the use of the reduced-gravity environment to study particulate combustion since the 1990s. Studying flames in clouds of particles (such as dust or metal powder) on the ground is quite difficult due to settling of the particles and disruption of the flame due to buoyancy-induced flow of the combustion products. A reduced-gravity environment eliminates both of those effects, so the team can perform clean and well-quantified experiments.

A flight on a space-based platform was the next logical step, which led to the PERWAVES experiment on MAXUS-9. The largest sounding rocket operated by the European Space Agency, it reached an altitude of 700 km. During its 15-minute flight, the rocket provided a microgravity environment comparable to or even better than aboard the International Space Station.

The immediate outcome of the experiment is that combustion researchers will, for the first time, have data on flame propagation in suspensions of a nonvolatile fuel (iron) under conditions where the flame propagates in a particle-to-particle regime, resulting in very low flame speeds. The scientific team’s preliminary analysis of the results from the PERWAVES experiment indicated that flames as slow as 1 cm/s were observed. In this regime, the flame is heavily influence by local fluctuations in particle concentration and cannot be described by the usual continuum-based models we use in combustion. The flames under these conditions propagate in a way similar to percolation, hence the name, Percolating Reactive Waves in Particulate Suspensions (PERWAVES).

In the longer term, the scientific team’s research can be used by the combustion science community to develop an experimental system that realizes a reactive wave in discrete, random media in three dimensions, which is a phenomenon that is ubiquitous in nature and technological applications, but for which there are few clean experimental systems to study.

Another long-term benefit is in the applications of metal combustion. Metals are volumetrically dense energy carriers, and thus metals could conceivably be used as green energy carriers for terrestrial-based power.

To see the MAXUS-9 rocket in action, watch the launch video and the onboard camera video provided by the Swedish Space Corporation.

To learn more about the background on McGill’s program on metal particulate combustion in microgravity, read the paper: Laminar dust flames in a reduced-gravity environment.

To learn more about the science behind the PERWAVES experiment, read the paper: Reaction-diffusion fronts in media with spatially discrete sources.

To learn more about the scientific team’s work on metals as zero-emission energy carriers, read the paper: Direct combustion of recyclable metal fuels for zero-carbon heat and power.