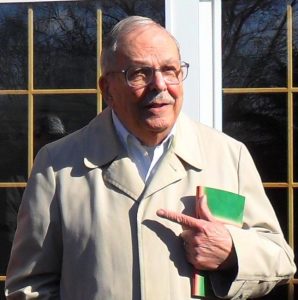 Bill was born in Oak Park, Illinois, in 1926. He went on to complete his BS, MS, and PhD all in mechanical engineering from Purdue University. His expertise included internal combustion engines, gas turbines, engine performance, automotive air pollution, and alternate fuels; he noted that he helped put the lead in fuels and years later helped take it out. He always worked to “make things better.”

He was retired from General Motors Research Laboratories, where he worked for 37 years as a researcher, department head, and technical director. He was a member of the National Academy of Engineering and served on many NAE committees, an SAE Fellow member, and Sigma Xi honorary engineering society member. He served in the US Army and as a civilian from 1944 to 1946 in Los Alamos, NM, on the Manhattan project. Bill authored and contributed to many articles and publications. In 2008, he captured many of his other adventures and activities in his autobiography: “Remembrances and Ruminations, What I did and what I thought” which sold out of its first printing of 100 copies.

With a great passion for education, Bill was instrumental in introducing the concept for A World in Motion (AWIM), which taught STEM skills to grade and junior high students. His contributions are honored by the Bill Agnew Award for Outstanding AWIM Volunteers which is given annually by the SAE to volunteers who further develop students’ understanding and experience in math and science by helping teachers use AWIM materials in the classroom.

Dr. Agnew’s obituary details more about his life and work.

The Combustion Institute honors Bill Agnew’s accomplishments and the work of scientific leaders who make significant contributions for the advancement of many diverse communities around the world.