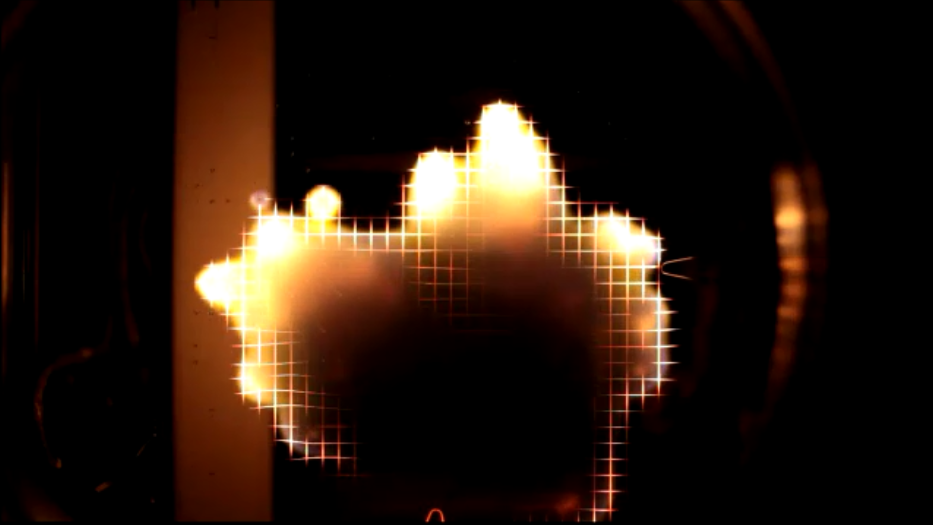 Example of flame-spread over a randomly distributed droplet cloud in the Japanese Experiment Module, Kibo, aboard the International Space Station (ISS). Image provided by the Japan Aerospace Exploration Agency (JAXA).

The mechanism of spray combustion, widely used in diesel and jet engines, gas turbines, boilers, and other combustion technologies, is still not clarified due to the various conditions and processes of such a complicated phenomenon. In order to better understand what controls group combustion excitation and the role of injected droplets, a team of combustion scientists have expanded their research into the cosmos.

The groundbreaking experiments require a microgravity condition to study the effects of [decane] droplets in practical spray combustion. Under normal gravity, droplet size is very small in practical spray combustion and the gravitational effect on combustion processes around each droplet is negligible. On the other hand, when a large droplet of about one millimeter (1 mm) is burned to observe behavior with high resolution in normal gravity, the buoyancy effect is significant and the behavior is therefore different from that with fine droplets. To investigate droplet combustion phenomena in detail with large droplets, a microgravity condition eliminates the buoyancy effect. Aboard Kibo, the group combustion experiment burns droplet clouds that contain about 100 droplets and require a long-duration, high-quality microgravity condition.

The immediate benefits of the scientific team’s research are in the improvements of the percolation model to describe group combustion excitation through flame spread and the accuracy of sub-models in a simulation code. In the long-term, the team’s findings will bridge the gap between droplet combustion and spray combustion, which will benefit other research in the fields of combustion science. The team’s findings will also eventually contribute to the industrial design of high-performance spray combustors with stable combustion.

The scientific team’s research in the paper has mainly taken place at Yamaguchi University, Japan, the Japan Aerospace Exploration Agency (JAXA), and aboard Kibo. The experiments are scheduled to conclude later this year.

Kibo (hope), is a nickname for the Japanese Experiment Module, which is Japan’s first human-rated space facility and JAXA’s first contribution to the International Space Station (ISS). Designed to conduct scientific research activities in orbit, Kibo hosts a wide variety of scientific and educational experiments. As a part of the ISS, Kibo provides extensive opportunities for space environment utilization.

The principal investigator (PI) and co-investigators (CIs) of the microgravity experiment project are as follows:

The images below depict a flame-spread sequence over a randomly distributed droplet cloud in the Japanese Experiment Module, Kibo aboard the International Space Station (ISS). The flame spread starts from a small spherical flame around a single fuel droplet and then grows until finally, a large-scale group flame appears. Images provided by the Japan Aerospace Exploration Agency (JAXA).